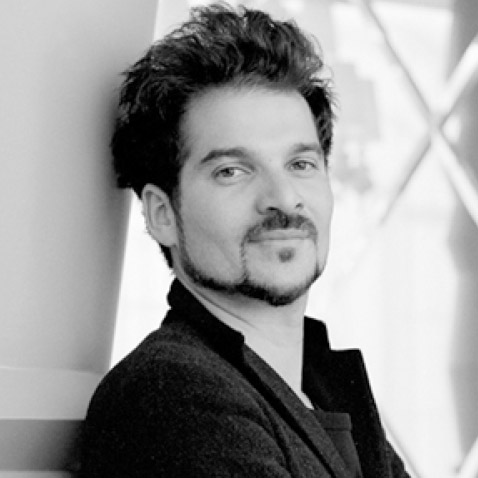 Spanish artist-designer Jaime Hayón was born in Madrid in 1974.
After studying industrial design in Madrid and Paris he joined Fabrica – the Italian design and communications research centre founded by Benetton – in 1997, directing the design department until 2003. Hayon set up his own studio practice in 2000, and dedicated himself fully to his personal projects from 2003 onwards. Today he is one of the most acclaimed creators across the globe.
Hayon’s esteem and knowledge of artisan skills and his inherent creativity have allowed him to push the boundaries of many media and functions, resulting in collections for a diverse range of clients. His interest in the conservation of craft skills has led his path to converge with those of high-end traditional companies who care about the evolution of their work. He has created furniture ranges for Fritz Hansen, Magis, Established and Sons, Bisazza, B.D. Barcelona, Se London, Bernhardt Design, Ceccotti and Moooi. Hayon has also designed various lighting collections for Metalarte and in collaboration with Swarovski and Baccarat. He has created accessories for Piper Heidsieck, Gaia and Gino and The Rug Company. In 2013 he designed his first wristwatch collection for the new Swiss watch brand OROLOG. These collections have put Jaime at the forefront of a new wave of creators who blur the lines between art, decoration and design, and of a renaissance in finely-crafted, intricate objects in the context of contemporary design culture.

In addition to his acclaimed intramurals for Madrid’s La Terraza del Casino restaurant and Camper footwear stores, Jaime is currently working on interiors for leading hotels, restaurants and retail establishments around the world that have become platforms for the creation of special objects and both functional and non functional elements.
His work has appeared in the most prestigious art and design publications worldwide, and he has won numerous awards. Time magazine declared Hayon to be one of the 100 most relevant creators of our time, and Wallpaper magazine has also listed him as one of the most influential creators.
With offices in Italy, Spain and Japan, Hayon’s main interest is to keep finding new perspectives and challenges.

Any cookies that may not be particularly necessary for the website to function and is used specifically to collect user personal data via analytics, ads, other embedded contents are termed as non-necessary cookies. It is mandatory to procure user consent prior to running these cookies on your website.